Catch Up on the Latest
Watkins News! 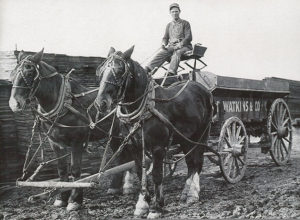 In 1934, J.B. Watkins, founder of J.B. Watkins Lumber Company in 1889, purchased the Besser Manufacturing Company. His son, Charles Watkins, operated the company at 4215 “R” Street and the name was changed to Watkins Concrete Block Company in 1941. The Watkins operations were temporarily closed due to World War II and a notable decline in local construction. In 1946, Charles Watkins bought the stock from his father and incorporated the company. Watkins Concrete Block Company, Inc., steadily increased business and achieved great success in the Omaha area.

Like other NEBCO companies, Watkins’ focus on progress kept the company active in acquiring new technology to remain competitive. In the mid 1980s, the company moved to its current location at 14306 Giles Road in southwest Omaha to take advantage of Omaha’s westward expansion, increased demands for its products and to reduce the distance between the plant and raw material sites.

When NEBCO purchased Watkins in 1988, it acquired a highly computerized automated block plant capable of producing up to 30,000 blocks per day. Today, Watkins is part of a network of block manufacturers throughout the state owned by NEBCO.

Catch Up on the Latest
Watkins News!